The Batanga is a lesser-known tequila cocktail that has a lot in common with the Cuba Libre (aka Rum & Coke). This spring-inspired riff on the Batanga adds a pop of cherry flavor with the addition of the luscious Luxardo Maraschino cherry syrup.

This simple tequila cocktail is made with blanco tequila, a squeeze of lime, and cola. The final ingredient that sets the Batanga apart from a basic Tequila & Coke is that it incorporates a salted rim. Some recipes also call for a pinch of salt directly into the drink.

The salt gives the drink a distinct Margarita-y feel by enhancing all the sweet and sour flavors. Salt also complements tequila and its array of earthy, herbal notes.

History of the drink

The original Batanga was reportedly created by a bar owner named Don Javier Delgado in the 1960s. His bar La Capilla in Tequila, Mexico still serves the drink today, giving it a signature twist by stirring it with a knife that’s also used for cutting guacamole and salsa ingredients.

Luxardo cherries are incredibly delicious marasca cherries from Italy. They’re candied in syrup made with marasca cherry juice and they have a flavor and texture that’s second to none.

If you’ve ever had a bright red, tangy maraschino cherry, you’re familiar with the cheap, dyed and corn syrup-sweetened garnish cherries that often appear in bar drinks. Luxardo cherries are authentic maraschino cherries – all natural, with a deep, dark red color and an intense, genuine cherry flavor.

I highly recommend using only Luxardo cherries and their syrup in this recipe. However, if you’re not able to find a jar, you could substitute high quality bing cherries in syrup instead. Luxardo Maraschino Cherries can be found at liquor stores and on Amazon.

You can use any cola you like for a Batanga, but my favorites are Mexican Coke and Fever-Tree Distillers Cola.

Mexican Coke is a popular cocktail choice because it’s made with real sugar and comes in glass bottles. Whether or not the taste is impacted by the use of sugar over corn syrup is debatable, but to me it tastes much better and more bubbly coming out of that glass bottle.

Fever-Tree Distillers Cola is made with Caribbean kola nuts, Mexican limes, and a spice blend that includes Madagascan vanilla. It’s a delicious soda that’s been carefully crafted, just like the spirits you mix it with. I love that it’s flavorful and not too sweet, a balanced, elevated version of the classic Coca Cola we all grew up with.

Can I just use cherry Coke?

You can certainly use cherry Coke – but your Batanga won’t taste quite as exquisite as this one.

The luscious natural cherry flavor from the Luxardo syrup and the smooth and citrusy Distillers Cola are what make this Cherry Batanga so dang good!

Salt is the key ingredient that separates the Batanga from a boring Coke & Tequila. Salt adds a zing and brightens the sweet and sour flavors of the citrus and soda. It’s also the perfect counterbalance to the rich Luxardo cherry syrup.

How to build the drink

A classic Batanga can be simply built in the glass. Add ice, tequila, a squeeze of lime, and chilled cola to a tall glass with a salted rim.

However, when adding a dense syrup like the Luxardo cherry syrup, it helps to incorporate that ingredient prior to adding the soda. If you stir the drink too much after adding the cola, you’ll risk losing a lot of the carbonation.

Instead, add the lime juice, cherry, and cherry syrup to the glass first and stir to combine. Then add the ice, tequila, and soda.

You can also shake the tequila, lime, and syrup with ice in a cocktail shaker and then strain them over fresh ice and top with chilled soda. But with such a small amount of syrup, it’s really not necessary.

You can use any tequila you prefer in a Batanga, but save those top shelf anejos for sipping. Tequila blanco is the traditional choice, but a reposado works great with the spice notes in the cola.

Here I used Tequila Cazadores Blanco, which is a nice clean blanco with notes of citrus and herbs. You can also use mezcal. I prefer a light smoke flavor in my mezcal when mixing with cola. A great mild mezcal choice for this drink is El Silencio. 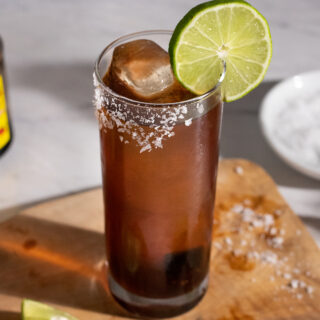 To rim the glass:

To make the cocktail:

Keyword coca cola, Luxardo cherry, salt, tequila
Tried this recipe?Let us know how it was!