The Jack Rose is a classic cocktail made with applejack or apple brandy, grenadine, and citrus. Like many classic cocktails, the exact ingredients and ratio of those ingredients is debatable, so I’m sharing my preferred recipe, historic specs, and tips to make it your own!

This ultra smooth, fruity, and flavorful Jack Rose recipe is made with Calvados, real grenadine, and freshly squeezed lime juice.

The Jack Rose has been around in one form or another since the early 1900s, reaching the height of its popularity in the ‘20s and ‘30s.

There are many stories about how it got its name, from a type of rose called the Jacquemot, to a New Jersey bartender named Joseph Rose, to an infamous criminal named Bald Jack Rose.

However, the most likely origin of the name is a combination of applejack and the rosey red color that the drink gets from grenadine.

There are conflicting stories about who invented the drink, but the first Jack Rose recipe appearing in print credited a New Jersey bartender named Frank J. May (who was also known as Jack Rose).

Grenadine is a classic cocktail syrup made with pomegranate juice. It is very easy to make at home, and the flavor and versatility of the syrup make it well worth it.

Make your own in less than 10 minutes with my homemade Grenadine Recipe!

Most grenadine syrups sold in grocery stores are little more than red-colored corn syrup, so read the labels if you decide to go with store bought syrup.

Nothing compares to the sweet and sour, intensely fruity flavor of real grenadine!

What is applejack? What’s Calvados?

Applejack is a brandy made from apple cider. It’s been made in the US since the late 1690s when a Scottish immigrant first started distilling it in New Jersey. His name was William Laird, and today Laird’s is still the best known brand of applejack in the world.

Originally, applejack was made by a process called “jacking.” Apple cider was fermented and then left outside in the winter to freeze. The frozen portion was removed, leaving the alcohol behind.

Today, applejack is commonly made by blending apple brandy with neutral grain spirits.

Calvados is an apple brandy made in Normandy, France. In order to be Calvados, certain requirements must be met, including using only certain apple varieties and a minimum period of aging in oak barrels (two years).

Both applejack and Calvados are smooth, apple-flavored spirits, but Calvados is typically a more refined product. The Jack Rose is traditionally made with American applejack such as Laird’s, but I really love it with Calvados such as the 5 year by LeCompte.

The earliest printed Jack Rose recipe from 1908 was actually made with raspberry syrup instead of grenadine, and it contained small amounts of lemon, lime, and orange juices. Check out that earliest recipe at Difford’s Guide.

By 1914, the Jack Rose was a mix of applejack and lime juice with a splash of grenadine. This recipe was the inspiration for my modern interpretation below.

Some say that the Jack Rose should be made with lemon juice, some say lime.

I like it both ways, but there’s just something about the bright flavor combination of lime and pomegranate that really stands out to me. I use lime juice in this recipe – feel free to make it with lemon, and see which you like best.

What ratio of ingredients is best?

When it comes to sour-style cocktails like the Jack Rose, the Gimlet, or the Daiquiri, I often go with the middle-of-the-road ratio of two parts strong (the liquor), to three-quarters part sweet, and three-quarters part sour. This breaks down to: 2 ounces Calvados, ¾ ounce lime juice, and ¾ ounce grenadine.

However, this is where things can get a little complicated, but if you enjoy experimenting with your drinks, this is your chance to see what you like best!

The ratio above ensures that you can still taste the flavor of the spirit, but it’s tempered a bit by the syrup and citrus. Some folks like the tone down the flavor of the liquor even more by going with a ratio of 2:1:1.

A fun variation to try if using a ratio of 2:1:1 is to use 2 ounces applejack (or Calvados), 1 ounce grenadine, and split the citrus between 1/2 ounce lemon and 1/2 ounce lime juice.

If experimenting with ratios, keep in mind that there’s variation of sourness from one citrus fruit to the next, and from limes to lemons. There’s also variable sweetness from one brand of grenadine to the next.

Real grenadine is both sweet and sour, but some store bought bottles lean heavy on the sweet. Limes tend to be a bit more sour than lemons, so depending on which citrus you use, you might find it tastes more or less sour. To summarize:

All of this being said, the 2 to ¾ to ¾ ratio is a safe bet for a well-balanced Jack Rose, so start there and just keep the above points in mind if you decide to do some tweaking.

I include these alternative ratios and tips not to overwhelm you, but to help you if the drink isn’t quite to your liking. There is such disparity between different brands of grenadine, so it could taste very different depending on which one you use.

Like so many classic cocktails, the Jack Rose specs can be adjusted to suit different tastes – and that’s ok, because at end of the day, the only thing that matters is that you enjoy your drink!

I love to riff on the Jack Rose and one of my favorite personal variations uses mezcal, a touch of bittersweet Aperol, and a fall-inspired rinse of allspice dram.

To make my Low Hanging Fruit cocktail, muddle three apple slices in a cocktail shaker. Then add 2 ounces mezcal, 3/4 ounce lime juice, 1/2 ounce grenadine, 1/4 ounce Aperol, and shake with ice. Strain into a coupe glass rinsed with allspice dram and garnish with an apple fan. Check out the video below to watch me make it with apples plucked right from my backyard!

What’s your preferred Jack Rose recipe? Tag me in all your applejack or Calvados cocktail creations on Instagram! 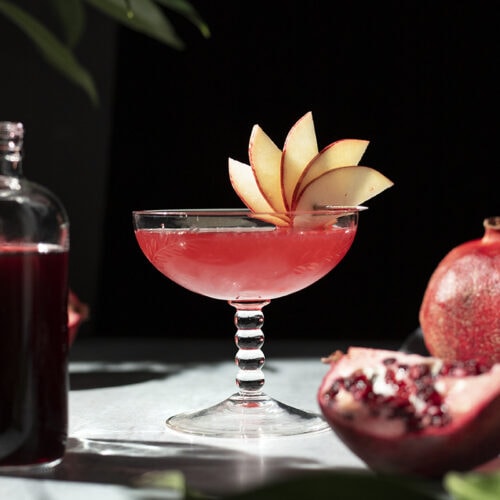 where to buy elastomers and silicone for sex toys