This post is sponsored by Spirit Hub. Learn more about how Spirit Hub brings craft spirits from independent distilleries to your doorstep here.

This tiki-inspired spiced rum and amaro cocktail is named for the Hawaiian way to say ‘Merry Christmas.’

Merrymeeting Spiced Rum from Portland Maine’s Three of Strong Spirits fortifies with flavors of cinnamon and ginger, while Amaro Amorino brings bitter orange and baking spice to the mix. A couple of dashes of Hella Aromatic Bitters emphasize the bittersweet flavors and add a finishing touch of clove and allspice.

One of the bottles in Spirit Hub’s Ultimate Home Bar Collection that immediately caught my eye is the Amaro Amorino. This beautiful liqueur from Washington state’s Letterpress Distillery is gently bittersweet with prominent baking spice and bitter orange. It’s lovely sipped on its own and it added just the right bittersweet layer to this tiki-inspired cocktail that’s all about citrus and spice!

How to make it:

This tasty cocktail contains fruit juices so it’s shaken. I chose to shake and then open pour (rather than strain) the cocktail and then top it up with plenty of crushed ice. This gives the drink an extra dose of dilution and keeps it extra chilled. You can opt to shake and strain the cocktail over cubed ice, but it will be a much more potent-tasting drink. I think a little extra dilution can help to mellow the flavors so that you can enjoy them all.

How to make cinnamon simple syrup

I made a simple syrup infused with cinnamon sticks for this cocktail. Cinnamon simple syrup is a great cocktail (or mocktail) ingredient during the winter months, so it’s worth making a batch and trying it out in other cocktail recipes like in place of simple syrup or a sugar cube in an Old Fashioned.

To make my syrup, I heated ½ cup of sugar with ½ cup of water and once the sugar dissolved, I added 2-3 cinnamon sticks broken into a smaller pieces. I brought the mixture to a boil, then let it simmer for about 5 minutes, and then removed it from the heat. Let the syrup cool to room temp with the cinnamon sticks in it, then strain them out and keep the syrup stored in a closed jar in the refrigerator for up to 2 weeks.

How to make ginger simple syrup

You can make your own ginger syrup if you like, and it’s not any harder than making cinnamon syrup! I had a bottle of Liber & Co Fiery Ginger Syrup when I made this cocktail, so I used that and it was perfect.

To make your own ginger syrup, combine equal parts water and sugar over medium heat, stirring frequently until the sugar dissolves. Add a piece of fresh, peeled ginger about the size of your thumb for every half cup of sugar. Cut the ginger into several smaller pieces. You can add more or less to taste, of course. Bring the syrup and ginger to a boil, then reduce and simmer for 5-10 minutes. Remove the mixture from the heat and allow it to cool completely before straining out the ginger. Store in a closed jar in the refrigerator for up to 2 weeks. 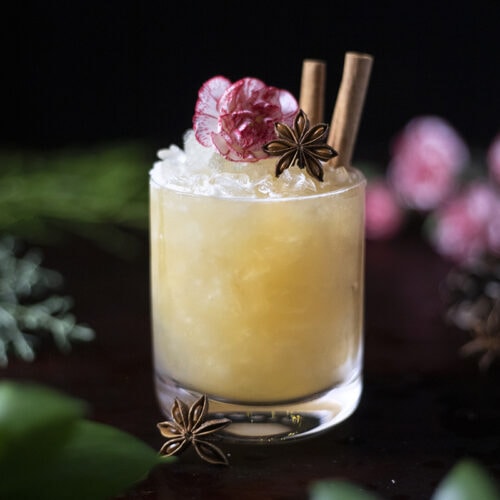 Keyword amaro, mele kalikimaka, rum,, spiced rum, tiki
Tried this recipe?Let us know how it was!