While a basic Gimlet can easily be enjoyed year round, the addition of rosemary make this one particularly suited to sweater weather or winter holiday celebrations!

History of the classic Gimlet

The Gimlet is a gin cocktail that has been around for over 150 years. The origin of the name “gimlet” is thought to come from the tool used to bore holes in wood called a gimlet drill bit.

Others say that it comes from the drink’s alleged inventor, a British Royal Navy doctor named Admiral Sir Thomas Gimlette. Legend has it that British sailors were instructed to mix their ration of gin with lime juice as a preventive tonic against scurvy (a painful illness caused by vitamin C deficiency).

To make this Rosemary Gimlet, you’ll need some gin, limes, sugar, water, and fresh rosemary. The cocktail ingredients are:

Choose a London dry gin such as Bombay Sapphire, Tanqueray, or Beefeater. The traditional, juniper-forward flavor profile is great paired with rosemary.

Another nice option for this cocktail is the herbal Gin Mare, which is made with rosemary, basil, thyme, and other botanicals.

You’ll need freshly squeezed lime juice for this recipe. The average lime yields about an ounce of juice, so plan to pick up at least one per drink. I use a simple elbow-style citrus squeezer for quickly (and effortlessly) juicing limes and lemons.

Because we’re adding the rosemary flavor to this recipe via a simple syrup, we don’t want to add a sweetened juice too – the drink would become way too sweet.

However, if you want to add some rosemary flavor to a simple Gimlet made with lime cordial, you can muddle a sprig or two of fresh rosemary with an ounce of cordial in a cocktail shaker. Then add 2 ounces of gin and ice and shake until chilled. Double strain the drink (to prevent getting any bits of herb in your glass) into a coupe glass.

Try a traditional, cordial-based Gimlet (made with Rose’s Lime Juice) or a simple, modern, freshly squeezed one in my Classic Gimlet Recipe!

How to make rosemary simple syrup

To make the rosemary simple syrup, you’ll need sugar, water, and fresh rosemary. I like to use about 4 or 5 sprigs of rosemary per cup of water and sugar. You can add more for a more flavorful syrup, but don’t go overboard – rosemary is potent and can quickly overpower other flavors.

This is also why I don’t cook my rosemary simple syrup for too long. Simmer the syrup for about ten minutes, then remove it from the heat and allow it to cool fully before straining out the rosemary. Get the detailed Rosemary Simple Syrup Recipe.

To make the cocktail:

Measure your gin, fresh lime juice, and cooled rosemary simple syrup and pour them into to a cocktail shaker. I like to use a simple angled metal jigger for making most of my drinks. The OXO Stainless Angled Measuring Jigger is a fantastic tool for home bartenders.

Fill the shaker about three quarters with ice and shake the drink until the shaker frosts over.

Now strain the liquid into a coupe or martini glass (preferably a chilled one!) and garnish with a sprig of fresh rosemary. Simple, delicious, and very easy to shake up a few at a time for fall or winter gatherings!

How to garnish with rosemary

You can simply drop a sprig of rosemary into the glass or clip it onto the rim using a mini clothespin. If you’re feeling adventurous, try skewering a long citrus peel with a pointy rosemary stem.

It makes a striking, gorgeously aromatic garnish. Get the full tutorial in my Guide to Citrus Peel Cocktail Garnishes!

Quick Rosemary Gimlet with plain simple syrup: If you’re short on time, you can skip the rosemary-infused simple syrup and instead muddle fresh rosemary into the drink. The amount of rosemary flavor in each drink may vary though, depending on how fresh or fragrant each sprig is.

To make this shortcut Rosemary Gimlet, measure three quarters of an ounce of plain simple syrup and pour it into your shaker. Drop in a couple of sprigs of rosemary and use a muddler to mash the herbs into the syrup.

Next, add three quarters of an ounce of lime juice and two ounces of gin. Fill the shaker about three quarters with ice, then shake until chilled. Use a fine mesh strainer when pouring the drink to keep any bits of rosemary out of the glass. Strain your Rosemary Gimlet into a cocktail glass and garnish with a sprig of rosemary.

Vodka Rosemary Gimlet: The Vodka Gimlet has been a popular alternative to gin since vodka’s boom in popularity in the 1980s. Simply swap out the gin and use two ounce of quality vodka instead.

Make it a Rosemary Mint Gimlet by adding a few mint leaves to the shaker. No need to muddle them, just shake along with the other ingredients and ice and then fine strain the drink into a cocktail glass. The addition of mint makes this herbal, winter cocktail feel even more cool and refreshing.

Make it a Blackberry Rosemary Gimlet by muddling a few fresh blackberries in the cocktail shaker first. Add the remaining ingredients and ice and shake as usual. Be sure to use a fine mesh strainer when pouring the drink. Blackberries pair nicely with both rosemary and gin and give the drink a lovely red hue.

Add other complementary fruit flavors to the Rosemary Gimlet by muddling slices of apples, pears, grapes, a wheel or grapefruit, pomelo, or blood orange, or even fresh pineapple!

You may also enjoy these other herbal cocktails: 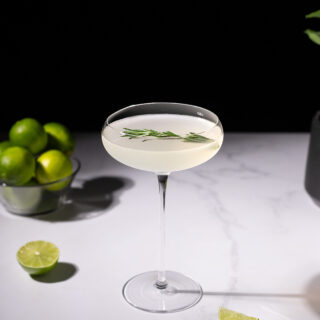 Keyword classic cocktails, gimlet, gin, rosemary, simple syrup
Tried this recipe?Let us know how it was!