The Saturn is a classic tiki cocktail that’s light, fruity, and simple to make. It’s notable in the tiki genre for its use of gin instead of rum.

With a mix of lemon, passion fruit, almond, and spices, the Saturn’s layered flavors and refreshing citrus make it a great summer drink.

History of the Saturn cocktail and Popo Galsini

The Saturn was invented by a bartender named J. “Popo” Galsini in 1967. He created the drink for the annual California Bartender’s Guild competition and it won first place.

Popo then took the drink to the ‘67 IBA World Bartending Championships where it unfortunately didn’t win first place, but it did help the Americans win the team event.

By the end of that decade, he’d somehow acquired the nickname Popo and had become a well-known and sought after bartender in Southern California.

In 1966, Popo was working at the Kona Kai when he invented the X-15, a mix of gin, lemon, passion fruit, falernum and orgeat. He named his drink after a cool space plane created by the company North American Aviation.

In early 1967, the Apollo 1 disaster claimed three lives and a North American Aviation design flaw was determined to be the cause. Popo changed the name of his cocktail to the Saturn, which was the name of a booster rocket used in Apollo missions.

The Saturn has become one of the best gin-based cocktails to emerge from the tiki bar heyday. Like many tiki recipes, it was nearly lost to history. Fortunately for us, Jeff “Beachbum” Berry revived the Saturn for a new generation of tropical cocktail lovers to enjoy.

The Saturn isn’t a complicated drink, but it does require two items that the average person might not have in their pantry: falernum and orgeat.

Falernum is a spiced liqueur or syrup originally from Barbados. The most common brand is John D. Taylor Velvet Falernum.

This low-abv liqueur is inexpensive and easy to find in liquor stores. It adds flavors of lime, ginger, and almond to tropical drinks.

Orgeat is an almond syrup made with a small amount of orange flower water or rosewater, giving it a slightly floral flavor. You can make your own or buy a quality brand such as Liber & Co Orgeat.

Falernum and orgeat are both used extensively in classic tiki cocktails, so investing in them will allow you to make a whole world of new drinks!

Here’s everything you need to make the Saturn:

How to make it

The Saturn is frequently served as a frozen blended drink, but it is also common to see it “flash blended” or shaken and served over crushed or pebble ice.

“Flash blending” refers to the use of an old fashioned style stand-up drink mixer. Many tiki cocktails are at their best if quickly blended (3-5 seconds) with one of these mixers and then dumped into a tiki mug.

The stand up drink mixer (imagine what ice cream shops use to make milkshakes) provides just the right amount of aeration, froth, and dilution, without blending the ice smooth.

If you have one of these mixers, it’s the preferred method for the Saturn. If not, you can use a regular blender for a frozen cocktail, or shake and dump the contents into a glass, then top with plenty of crushed ice.

The Saturn has its very own unique garnish, resembling the planet Saturn and its characteristic rings.

There are a few ways to make this, but I like to cut a lemon wheel, peel away the flesh, and use the circular peel as my ring. I use a cocktail pick to skewer the lemon ring with a Luxardo maraschino cherry in the center.

You can also simply peel a long piece of lemon (or lime) peel and wrap it around the cherry, then skewer in place with a cocktail pick. 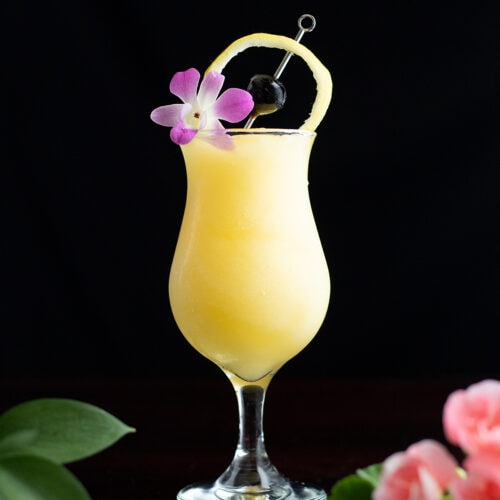 Keyword falernum, gin, orgeat, passion fruit, tiki, tropical
Tried this recipe?Let us know how it was!

excellent post, very informative. I'm wondering why the opposite specialists of this sector don't realize this. You should proceed your writing. I'm confident, you have a great readers' base already!

I have really noticed that credit score improvement activity must be conducted with techniques. If not, you may find yourself damaging your ranking. In order to succeed in fixing your credit ranking you have to ensure that from this moment in time you pay your monthly expenses promptly in advance of their appointed date. Really it is significant on the grounds that by not necessarily accomplishing this, all other methods that you will decide to use to improve your credit positioning will not be helpful. Thanks for revealing your ideas.

I just could not depart your website prior to suggesting that I extremely enjoyed the standard information a person provide for your visitors? Is going to be back often in order to check up on new posts