The Amaretto Sour is a fun cocktail with a bad reputation. Best known for being a party girl, at heart she’s actually very sweet. Ok, sometimes too sweet.

But we’re going to fix that. Let’s make a smooth, not too sweet Amaretto Sour that’s full of rich amaretto flavor and crisp citrus.

Amaretto is a sweet Italian liqueur that has a characteristic nutty, almond-y flavor. Although most folks think of it as an almond liqueur, it’s actually most commonly made from apricot kernels or peach pits.

According to legend, the first bottle of amaretto was made by steeping apricot kernels in brandy in the 1500s.

Some amarettos are indeed made with bitter or sweet almonds. Some are made with a combination of almonds and the fruit pits.

The common thread through all of these ingredients is the organic compound benzaldehyde, which lends the liqueur its almond-like flavor.

Is Amaretto a high alcohol liqueur?

Amaretto averages about 20% alcohol, which is typical for a liqueur. For comparison, that is about half as strong as the average bottle of whiskey. Contrary to what many believe, Amaretto is not a potent, high alcohol liqueur (like green Chartreuse, for example, at 55%.).

Why is the Amaretto Sour considered “girly”?

The Amaretto Sour is often considered a drink for new or inexperienced drinkers. The reason for its reputation is because it’s typically a sweet, low-alcohol drink – and it’s frequently made way too sweet. (FYI, beverages don’t have genders.)

Fear not the judgement of your friends or random people on social media, the Amaretto Sour we’re about to make is neither too sweet or too low in alcohol.

The end result is a delicious and easy-sipping cocktail that drinkers both new and experienced will appreciate.

The following modern recipe is Jeffrey Morgenthaler’s Best Amaretto Sour in the World. Morgenthaler was the genius who added bourbon to the mix, which greatly improves this sweet drink and boosts the ABV. He also made his sour with freshly squeezed lemon juice and egg white, bringing crisp citrus flavor and a creamy, smooth head to the drink.

Although sour-style cocktails have been around since the late 1800s, the Amaretto Sour wasn’t invented until some time in the 1970s. Around this time, Italian liqueurs like amaretto were being introduced in the United States and finding their way into American cocktails.

The earliest Amaretto Sours were a quick mix of amaretto liqueur and pre-made sweet and sour mix. The two ingredients were poured in roughly equal parts over ice, and that was that.

As you can imagine, the results could be cloyingly sweet, having quite a bit of sugar in both the liqueur and the sour mix. Using freshly squeezed juices in sours yields much better cocktails, and also cuts through the sweetness of syrups or liqueurs.

Morgenthaler’s improved Amaretto Sour adds three quarters of an ounce of cask-strength bourbon. This is whiskey at its strongest, undiluted or only diluted slightly.

The reason for adding this whiskey is twofold: increase the alcohol content of the cocktail, and increase the flavor of the amaretto liqueur.

High proof whiskey is bursting with complementary flavors and it helps the gentler flavors of the amaretto stand out. If you haven’t purchased this variety of whiskey before, pick up a bottle of inexpensive and versatile Wild Turkey 101.

How to get great foam on top

I used a dry shake/wet shake method here. To dry shake is to shake ingredients in the shaker but without any ice.

A wet shake is a standard shake involving both the cocktail ingredients and the ice. By first shaking without any ice, you can build up a pillowy cloud of foam.

Pro tip: make your foam bigger and fluffier faster by throwing a spring from a Hawthorne strainer into the shaker with the ingredients. As Morgenthaler suggests, you can also use a handheld immersion blender to build the froth. Follow either of these methods with a standard wet shake to chill and dilute the drink properly.

Do you love an Amaretto Sour? What are your preferred specs? Tag me on Instagram and show me how you shake up this modern classic! 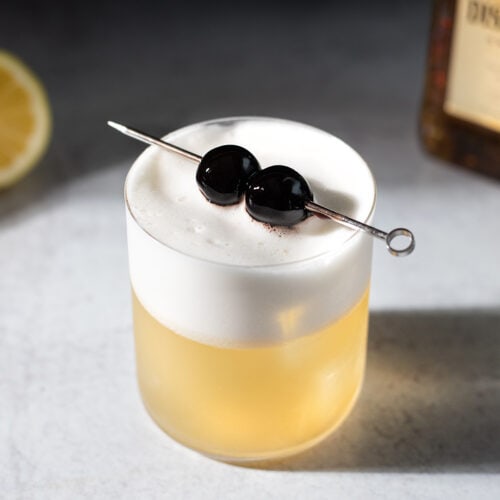 Keyword amaretto, bourbon, rye whiskey, sour, whiskey sour
Tried this recipe?Let us know how it was!

how to use toys sex

Why Are Some Vape Juices Only For Pods