The Modern Mariner is a fun twist on a tiki cocktail from the ‘90s. This refreshing cocktail replaces the original drink’s base of rums with bourbon whiskey. The vanilla, caramel, and spice notes of a quality bourbon are the perfect complement to allspice and citrus!

This stunning glass is the Whisky Tasting Glass from Peugeot-Saveurs. Not just for tasting spirits neat, this brilliant design features a metal base that helps to keep your drink at the perfect temperature. It also accents the beautiful tapered design of the glass!

Simply pop the heavy metal base in the freezer an hour or more before use. The metal holds the cold for a surprisingly long time, keeping spirits and other drinks perfectly chilled.

The unique shape of the Whisky Tasting Glass is ideal for tasting spirits or enjoying aromatic garnishes on craft cocktails. Here I’ve accented the flavors of citrus and spice with freshly grated nutmeg and a bouquet of mint.

Find this Whisky Tasting Set on the Peugeot Saveurs site and check them out on Instagram!

History of the Ancient Mariner cocktail

The Ancient Mariner cocktail that inspired this recipe was invented by tiki historian Jeff “Beachbum” Berry in 1994. Berry named his blend of rums, allspice liqueur, lime and grapefruit for the 1798 poem The Rime of the Ancient Mariner by Samuel Taylor Coleridge.

The Ancient Mariner in the story was an old sailor who tells his tale of a long and very strange journey at sea. Fun fact: this poem is the origin of the expression “water, water, everywhere, but not a drop to drink.”

When I want to make a cocktail that uses allspice dram, the Ancient Mariner and the Lion’s Tail are two that immediately come to mind. And my recipe below is a fusion of those two drinks.

My Modern Mariner is a great option if you’re new to tiki recipes and don’t yet have a large selection of aged rums.

It’s also a great way to take the original rum-based recipe from the hot summer days to the cooler weather of fall and winter.

There’s just something about bourbon that says cozy sweaters and a crackling fire!

What is allspice dram?

Allspice dram or pimento dram is a liqueur flavored with allspice berries. These berries grow in Jamaica on pimento trees. Allspice liqueurs are typically made with Jamaican rum and additional spices like cloves for added depth of flavor.

Allspice liqueur is relatively easy to make at home, but it’s not difficult to find in major liquor stores these days either. You can also make your own allspice simple syrup, which will add a similar (although not quite the same) flavor to the drink.

How to substitute with allspice simple syrup

If you don’t have allspice dram and can’t find it in stores, you can make a quick allspice simple syrup as a substitute in this recipe. Simply combine ½ cup of sugar and a ½ cup of water in a small saucepan over medium heat.

Add 5-6 whole allspice berries and bring the liquid to a boil. Once bubbling, reduce the heat to low and simmer for 5-10 minutes. Remove the pan from the heat and all the mixture to cool fully before straining out the allspice. Store the simple syrup in a closed container in the refrigerator for up to two weeks.

Tip: If making your own allspice simple syrup, you can opt to use ¾ oz of the syrup in place of both the allspice dram and the plain simple syrup that the recipe calls for.

If making plain simple syrup too, simply combine equal parts warm water and sugar and stir until all of the sugar has dissolved. Store in the refrigerator for up to two weeks.

A sprinkle of freshly grated nutmeg is the perfect aromatic finish for this spiced whiskey cocktail. I used the Peugeot-Saveurs Madras Manual Nutmeg Mill, which is so much better than using a microplane!

I often use fresh nutmeg in cocktails (think classics like the Painkiller, Brandy Alexander, or Fish House Punch) as well as cooking and baking. The Madras is a beautiful and simple to operate nutmeg mill that makes it so easy to quickly add that fragrant, spiced flavor to food or drinks.

I also really like that you can store your whole nutmeg berries in the top piece to save space. This is a tool I’ll be adding to my list of top holiday gift picks for home bartenders!

You may also enjoy these other whiskey cocktails: 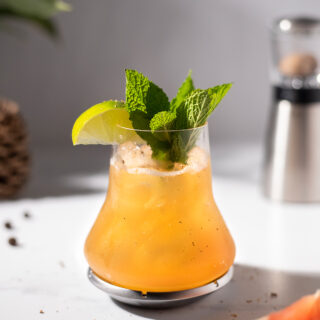 Spot on with this write-up, I truly feel this web site needs far more attention. I?ll probably be returning to read more, thanks for the information!

After I originally commented I appear to have clicked on the -Notify me when new comments are added- checkbox and from now on every time a comment is added I get 4 emails with the same comment. There has to be an easy method you are able to remove me from that service? Kudos!

Hello there! I just would like to offer you a big thumbs up for the excellent information you've got right here on this post. I'll be returning to your site for more soon.

A fascinating discussion is worth comment. I do believe that you should publish more about this subject, it might not be a taboo matter but typically people don't speak about these topics. To the next! All the best!!