The Scofflaw is a Prohibition-era cocktail that combines rye whiskey and dry vermouth with lemon juice, grenadine, and a dash or two of orange bitters.

This classic cocktail got its name from a term for those who continued to imbibe during Prohibition in the US in the 1920s – those who “scoffed” at the law.

History of the Scofflaw cocktail

The term “scofflaw” was created during a contest held by a teetotaler named Delcevare King in 1923. The intent was to crowdsource and popularize a shameful nickname for those who chose to drink despite the law.

The term didn’t really catch on, and Prohibition thankfully came to an end in 1933, but this cocktail and its clever name have endured.

Although the Scofflaw was created during Prohibition, it actually wasn’t served in one of those iconic American speakeasies.

The cocktail was invented in 1924 at Harry’s New York Bar in Paris, France. Word of the contest had spread across the Atlantic and a bartender named Jock felt inspired to pay tribute to the American scofflaws with his mix of whiskey, citrus, and grenadine.

Harry’s New York Bar is an iconic bar that was a favorite haunt for influential figures like Ernest Hemingway and F. Scott Fitzgerald. Other famous classic cocktails to emerge from Harry’s include the French 75, the Sidecar, and possibly the Bloody Mary.

What whiskey to use

Today the Scofflaw is most commonly made with American rye whiskey, but during the time it was invented it would have been made with Canadian whisky (Canadian whiskies are often rye-heavy).

Rye whiskey and dry vermouth make the Scofflaw on the drier side, so some prefer to use bourbon in place of rye. Bourbon gives the drink a slightly sweeter feel. You could also opt to use a Canadian whisky to make a very authentic version of this old school cocktail.

This cocktail relies heavily on the flavor of quality grenadine and fresh lemon juice.

Grenadine is a syrup made from pomegranate juice, rosewater, and pomegranate molasses (optional, but adds deeper flavor).

Real grenadine is typically very dark red in the bottle and ruby red in the glass. If you’re using neon-red, artificially flavored grenadine, your cocktails will taste artificial too.

Grenadine isn’t hard to make, so if you have five minutes and a few ingredients, try my easy Grenadine Recipe. You can also buy a quality brand like Liber & Co.

This translates to something like: 1 ½ oz whisky, 1 ½ oz vermouth, ¾ oz lemon, ¾ oz grenadine. While this is a perfectly drinkable ratio, the whiskey gets a bit lost.

Instead I’ve opted for a more modern take on the Scofflaw here with 2 ounces of rye and 1 ounce of dry vermouth. And if you have them, don’t forget to add a dash or two of orange bitters! 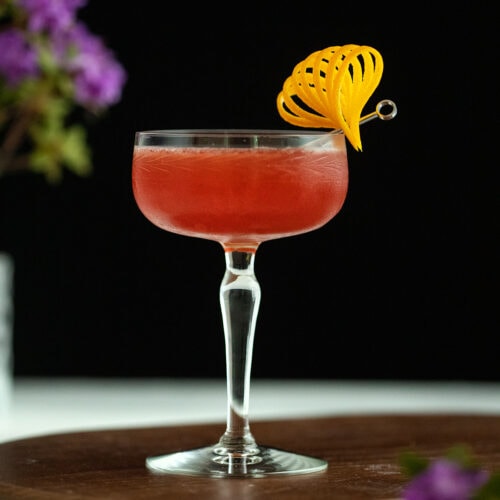