The Corn ‘n Oil is a classic rum cocktail that’s much tastier than its name would lead you to believe!

There’s no corn or oil in this simple drink, but the appearance of blackstrap rum floating on its surface is vaguely reminiscent of an oil slick.

What does Corn ‘n Oil mean?

Surprisingly, the odd name of this cocktail is actually a biblical reference. Thanks to Difford’s Guide, I learned that the Corn ‘n Oil name came from a verse in the Old Testament. The line describes the gifts of the promised land as corn, wine, and oil.

The Corn ‘n Oil is great for the new rum drinker or anyone just beginning to explore the genre of tiki cocktails.

Other than rum, some standard Angostura bitters, and a little fresh lime, all you need to make this classic is a bottle of falernum. Preferably John D. Taylor Velvet Falernum, which is fairly easy to find in stores and not too pricey.

Velvet Falernum is a low-alcohol liqueur with a characteristic sweet and spicy flavor. Falernum is made with ginger, cloves, lime, allspice, and almonds, among other ingredients.

This flavorful liqueur from Barbados is a staple in many tiki cocktails like the Saturn and the Cobra’s Fang.

The traditional choice for the Corn ‘n Oil is a blackstrap rum, which could be more accurately referred to as ‘black rum.’

This rum style is a bit hard to define. It’s very dark in color, rich and flavorful, although often made with young rums that have been colored, flavored, or sweetened.

With black rum, you don’t always know what you’re getting, but if you stick to recommended bottles like Cruzan Blackstrap Rum, you won’t be disappointed. If you want to know more about this odd misnomer of a rum category, check out this great article on Punch.

Although black rum is often the first choice for a Corn ‘n Oil, many recipes suggest an aged rum from Barbados instead.

Examples of some great Barbados rum brands include: Mount Gay, Foursquare, Doorly’s, and The Real McCoy.

Lime, or no lime?

The drink was originally just a couple ounces of rum with about a half ounce of falernum. Over time, bitters and a squeeze of lime were added.

If using an aged rum instead of a black rum, you might choose to skip the half ounce of lime juice and just garnish with a lime wedge.

Black rums can make the drink much sweeter, so they benefit from the acidity of a solid squeeze of lime.

With a quality aged rum however, the drink can feel well-balanced with just the falernum and the bitters, leaning more towards an Old Fashioned style of cocktail.

I personally like to use one ounce of each black rum and Barbados rum and the juice of half a lime. This makes for a tasty, sweet and sour cocktail that checks all the boxes and is still very easy to make.

Build in the glass

The Corn ‘n Oil is an easy-going drink that requires no fuss. Simply fill a glass with ice, add your ingredients, and stir well. Serve it over crushed ice if you want more dilution.

You can shake and strain over fresh ice if you want, but it’s not necessary to enjoy this simple cocktail.

The traditional garnish is a lime wedge. I opted for a lime wedge and a gorgeous edible flower from Gourmet Sweet Botanicals. The flower pictured here is a fuchsia.

You may also like these other simple rum cocktails: 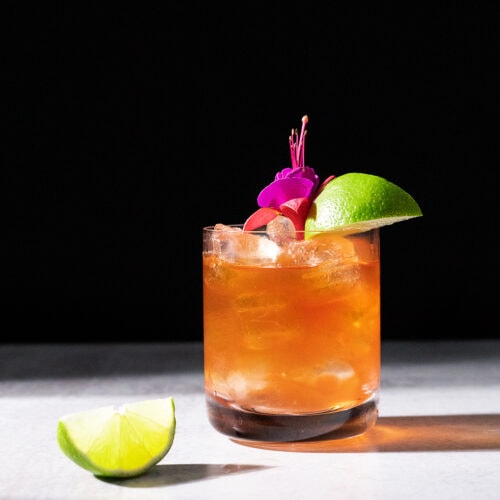 Keyword Angostura bitters, falernum, lime cordial, rum,
Tried this recipe?Let us know how it was!

Very few internet sites that occur to be in depth below, from our point of view are undoubtedly well really worth checking out.

Just beneath, are numerous totally not associated web-sites to ours, on the other hand, they're certainly really worth going over.

Heya! I'm at work surfing around your blog from my new iphone 4! Just wanted to say I love reading through your blog and look forward to all your posts! Carry on the outstanding work!