The White Russian is a decadent dessert drink made with three simple ingredients: vodka, coffee liqueur, and heavy cream.

The history of the cocktail

The White Russian was first mixed some time during the 1950s, but its popularity skyrocketed in the 1990s after the movie The Big Lebowski.

The cult classic features the White Russian as the main character’s drink of choice, and the “Dude” helped to renew interest in this sweet and creamy cocktail.

In 1949, the Black Russian (vodka and coffee liqueur) was first created, and the White Russian appeared shortly after. The addition of cream softens the rough edges of the Black Russian, making it almost too easy to drink.

The earliest printed White Russian recipe calls for equal parts vodka, coffee liqueur, and cream, but modern takes on the recipe usually lean a little heavier on the vodka.

Make one in a few easy steps

Plenty of ice: First, fill a double rocks glass with ice. No, really – make sure the glass is nearly overflowing with ice. The more ice, the colder the drink will be and the less dilution you’ll have.

This is especially important because we’re going to build this cocktail in the glass, rather than shaking or stirring and then straining cold liquid over ice.

Measure and pour: Measure 1.5 – 2 ounces of vodka and 1 ounce of coffee liqueur and pour each over the ice. Stir with a bar spoon to chill. Now, carefully pour .5 to 1 ounce of cream on top. Some prefer less cream, some like more.

Float the cream, if you like: If you pour gently, from just above the drink, you’ll notice that the cream tends to cascade into the liquid and then sort of bounce back up to the surface.

This is the “float” of cream that makes a layered White Russian look so pretty. Finally, I like to stir the drink really well to ensure that it’s very cold and well-mixed before drinking.

Garnish with a little freshly grated nutmeg, if you have it. You could also go with chocolate shavings. Or a pretty white edible flower if you’re feeling fancy!

To shake or to build in the glass?

Some prefer to shake their White Russians, and shaking would be the “proper” way to fix a cocktail with cream. Shaking will lend an extra smooth mouthfeel as the cream becomes gently whipped.

Shaking will also increase the dilution a bit, so keep that mind. Whichever way you choose, rest assured it will still be delicious and oh so indulgent!

If shaking this drink, I like to use only a half ounce of cream to ensure that the finished product doesn’t taste watered down.

Can you make a White Russian with whole milk or half and half?

Yes. In fact, you can make a pretty good White Russian with most any creamy, dairy-like beverage. Make it with almond milk, make it with oat milk.

Any milk or cream will do, but only cream will float cleanly on top (if the pretty layers matter to you). Also, there’s no comparison to heavy cream when it comes to rich, luscious texture.

Milk is much more watery, so it still makes a tasty drink but with a very different mouthfeel. For a creamy vegan option, try coconut milk. For café mocha vibes, try it with chocolate milk! That’s called a Dirty Russian, I believe. There are a ton of variations on this booze-coffee liqueur-cream combo, including the Mudslide.

What coffee liqueur to use?

Most White Russian recipes call for Kahlua, arguably the most popular and widely available coffee liqueur in the US. However, there are other great coffee liqueurs to choose from, including St. George NOLA Coffee Liqueur, Moketo Espresso Liqueur, Mr. Black, or Grand Brulot (which I used here).

Make it a mocktail

You could make an even simpler version by mixing equal parts cream and syrup. This is a sweet and very rich drink, so using whole milk or a plant-based milk is a great way to lighten things up. Try it with one ounce milk, one ounce cream or half and half, and one ounce coffee simple syrup.

What’s the difference between a White Russian and a Mudslide?

A Mudslide follows the same recipe as the White Russian but replaces the heavy cream with Irish cream liqueur.

Irish cream is a sweetened blend of Irish whiskey, cream, and chocolate, vanilla, and/or coffee flavors. It’s a lovely, indulgent melange that adds another level of creamy sweetness to the classic White Russian.

It also adds more booze to the mix, so a Mudslide can be a quick road to a hangover if you’re not careful!

This variation takes the classic recipe to another level with a splash of cola. Pour equal parts (1 oz) each vodka, coffee liqueur, and cream over ice in a double rocks glass. Next, top with a couple ounces of cola and stir gently to combine.

Want to know my favorite way to drink a White Russian? With cognac instead of vodka. I guess that’s not really a White Russian, but it sure is good. Try it with brandy or rum or whiskey if you’re feeling adventurous.

What’s the best vodka for a White Russian?

The best vodka for any vodka cocktail is one that’s high quality with a clean, neutral taste. Vodka’s strength is its neutrality, making it a very versatile fortifying ingredient.

That being said, there’s no need to use your most expensive bottle in this cocktail. Save ultra premium spirits for boozy sips where the liquor’s flavor is the focal point. I used a great organic vodka from Humboldt Distillery here. I also recommend Pau Maui Vodka or Absolut.

How many calories are in a classic White Russian?

In this recipe, there are approximately 345 calories. This is based on a mix of 2 ounces of vodka, 1 ounce of generic coffee liqueur, and 1 ounce of heavy cream.

I sometimes scale the cream back to a ½ ounce, and that will bring the calorie count down to about 293.

The old school, equal parts recipe clocks in at 281 calories. The White Russian is an indulgent dessert drink, so it’s definitely not a dieter’s first choice, but you can go a little lighter by choosing milk or skipping the creamy element altogether and making a Black Russian.

The Black Russian is a duo consisting of vodka and coffee liqueur. It’s strong and sweet and perfect for coffee lovers. If you like this mix, you’ll love an Espresso Martini. Simply combine 2 ounces of vodka with 1 ounce of coffee liqueur in a rocks glass filled with ice.

Disclosure: This post may contain Amazon affiliate links. This means that if you click through and make a purchase, I will earn a small commission at no extra cost to you. 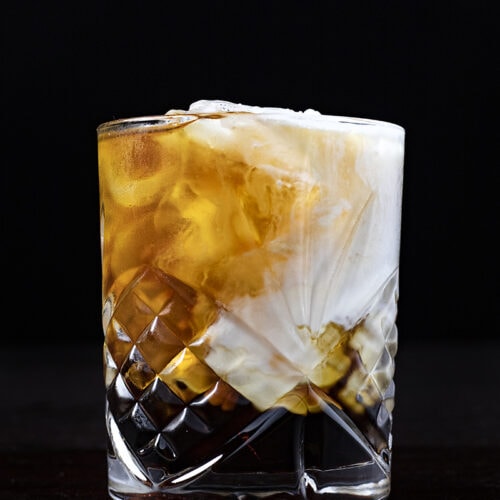 This variation takes the classic recipe to another level with a splash of cola. Pour equal parts (1 oz) each vodka, coffee liqueur, and cream over ice in a double rocks glass. Next, top with a couple ounces of cola and stir gently to combine.

The Black Russian is a duo consisting of vodka and coffee liqueur. It’s strong and sweet and perfect for coffee lovers. If you like this mix, you’ll love an Espresso Martini. Simply combine 2 ounces of vodka with 1 ounce of coffee liqueur in a rocks glass filled with ice.

Want to know my favorite way to drink a White Russian? With cognac instead of vodka. I guess that’s not really a White Russian, but it sure is good. Try it with brandy or rum or whiskey if you’re feeling adventurous.